Well, time has come. This is the first Palestra Back post that is not exclusively about basketball. In fact, it’s not really about basketball at all. This may be the first, but it won’t be the last. I will attempt to keep about the ratio we’ve had so far of basketball to non-basketball, which means if all you want is hoops, it won’t be too difficult to ignore the occasional interruption. I’ll use two terms for these: 30 Second Timeout (tangentially, sort of about basketball, like this post) and Full Timeout (in no way, shape, or form about hoops… you’ll see these in the summer).

So if you’ll allow me, Mr. Official, I’d like a thirty.

In Joe Lunardi’s latest edition of “Bracket Math”, before he got to his bracket changes, he talked a bit about the new College Football Playoff.  (It’s only available on ESPN Insider, but I’ll be quoting the important parts for this discussion moving forward.)

“There can’t be a true champion of anything until every team with a legitimate chance to win is included. This is why the NCAA tournament — along with pretty much every level of every sport — will continue to trump FBS football.”

“This is never a problem in college basketball. Quite simply, no team below No. 68 on any seed list is a legitimate title contender. And the inclusion of every conference champion ensures a truly national field that represents the entire Division I membership. So wake me when we have a 16-team FBS bracket that includes all conference champions and a suitable number of at-large teams.”

I happen to agree with those sentiments. Choosing playoff participants is a fine line. You would want a system that allows every team some chance to win the championship, without wasting everyone’s time by giving undeserving teams more opportunity. The NBA and NHL take too many. The NFL and MLB often take too few (or are rumored to be adding more). March Madness would appear to have too many teams, but bringing 68 out of 330+ teams is an appropriate ratio. It just looks worse because the Madness is so much bigger than any tournament and, while inviting every conference champ provides everyone opportunity, it creates an imbalance by not inviting the actual 68 best teams.

But for my money, despite it’s flaws, the NCAA tournament is just too damn fun to ever consider changing.

Let’s then apply many of it’s principles to the clearly flawed football system.

(Earlier this season, I did the opposite. I looked at what March Madness would look like if the NCAA invited the same percentage of basketball schools as they did football schools. Last year’s winner and runner up, as well as every Cinderella ever, were excluded.)

Lunardi brings up inviting conference champions, so we’ll start there. There are 10 FBS college football conferences (and the 4 independents, but we’ll get to them). In a perfect world, all 10 champions would receive an invite to the playoff (and all 10 conferences would have a champion…looking at you Big XII). In this scenario, every team begins the season with the hope of playing in the playoff. Win your league, and you’re in.

Joey Brackets offers the idea of a 16 team tournament. That means 10 champs and 6 at large bids. As for the independents, I’m not sure what to tell them. If they were to finish in the top 10, they’d be invited as an at-large bid, but unlike team’s in conferences, they couldn’t finish below there and still be invited. Just like they had with the BCS, Notre Dame would surely negotiate some sort of guarantee. If they, or Navy, Army, or BYU, were to finish with 10 plus wins and in the top 15 in the rankings, they are as good as in. Now, using the final College Football Playoff Rankings (and making some assumptions for the unranked teams), here’s what that would look like:

(and yes, despite the NCAA’s bowl ban for Georgia Southern in their first year of FBS, they are the Sun Belt champs, so they are in) 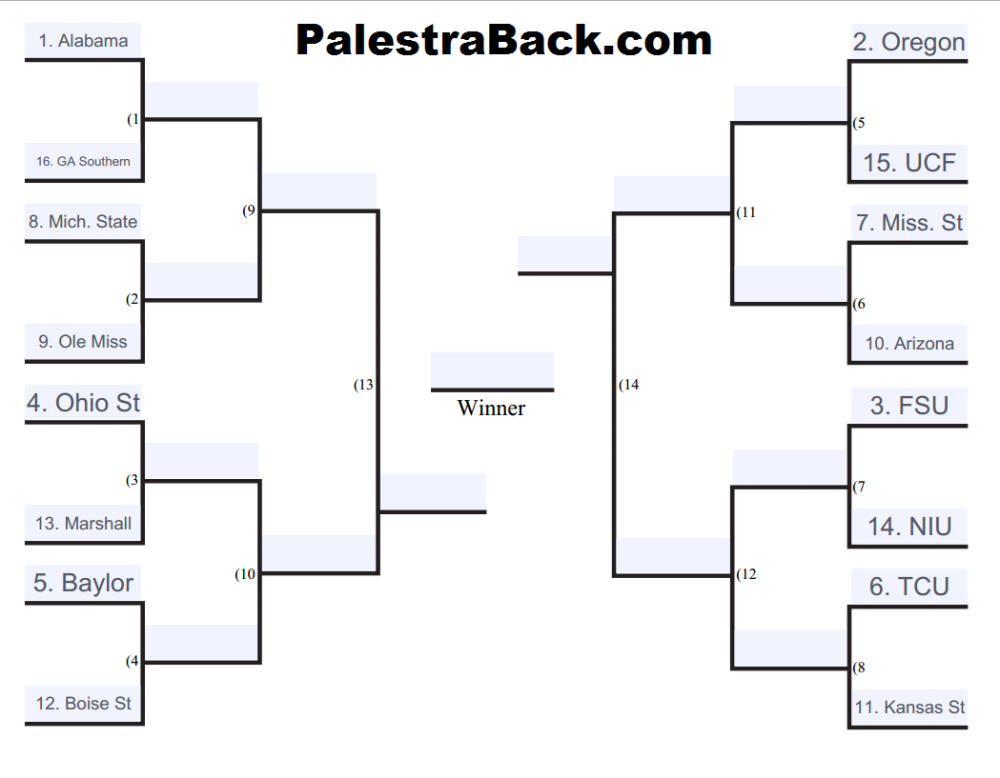 We’ve given every team in the nation a great opportunity, but what have we actually done in terms of choosing a champion? TCU, Baylor, and Mississippi State are certainly among the teams who could compete for a national championship. But some of the fringe teams don’t seem as worthy. Arizona got destroyed by Oregon, Ole Miss fell apart down the stretch, and Kansas State blew their chances. They shouldn’t get the chance to compete for the title and they aren’t Cinderella (more like Wicked Step Sisters in this scenario). Not to mention, any guesses as to the betting line on Bama-Georgia Southern?

So let’s trim some of the fat. Now we’ll have 12 teams. 10 conference champs and 2 at-large teams. For the most part, any team who would be at-large eligible had the opportunity to win their conference. Arizona, Michigan State, and the like all lost to their eventual league champs. Our two at-larges will be the top two ranked non-champions, both of whom do seemingly deserve to advance. Mississippi State only lost one game (UPDATE: This is incorrect as the Bulldogs also lost the Egg Bowl to Ole Miss…so I suppose you can disregard the next sentence or two. Mississippi State did still finish as the 7th ranked team and would qualify for the 12 team tournament as an at-large bid, but it would be more of a stretch and Sparty would be the odd man out), and it was to top ranked Alabama. Technically, they tied for the SEC West title with the Crimson Tide, with Bama’s head-to-head win breaking the tie. But out in Texas, Baylor fans will gladly tell you that head-to-head didn’t mean much to the committee. (UPDATE PART II: See, that doesn’t make much sense anymore. It would be great if it did, but…) We’ll invite the top two teams from the Big XII and Mississippi State.

That looks pretty good to me. We no longer offer up the worst conference winner to the #1 team as sacrifice. The top 4 teams are rewarded with byes and our 5 “mid-major” champs need to beat one of the big boys (or another accomplished mid-major in the case of Boise State and Marshall) to advance to the quarterfinals.

For the traditionalists curious what happens to the bowl system, the quarterfinals become the major bowls. The first round of games takes place on the campus of the higher seed (or at a regionally friendly site, like the NCAA tournament does) in mid-December. Then the 4 quarterfinal “bowls” (Sugar, Rose, Fiesta, and Orange) still occur on or around New Year’s day. If you’re picky about conference traditions, the highest ranking teams could choose which bowl site they play at or conference affiliations could continue (the Pac-12 or Big Ten champ would play in the Rose Bowl, based on whoever is higher ranked, for instance).

Is it perfect? Not probably not. I’m sure that issues will arise (Notre Dame related, probably and UPDATE PART III: The second at-large bid would be what causes real upheaval in this scenario). Is it better than leaving out teams with a legitimate chance to win the title and renders half the nation’s teams hopeless and useless? I think so.

One thought on “30 Second Timeout: Using Basketball to Improve the College Football Playoff”