NC State 71, Villanova 68 – NCAA 2nd Round: One of those games that refused to stop being fun.

UCLA 60, SMU 59 – NCAA 1st Round: Refs bungled the ending of this one with a late goaltending call, which made it even crazier.

Notre Dame 67, Butler 64 (OT) – NCAA 2nd Round: The hardest omission from the top ten. Featured a litany of wacky turnovers, missed opportunities, and ended with a blocked 3-pointer.

Games 1 and 2 of the NBA Finals

This year we had the first NBA Finals series to ever begin with two overtime games. Both were nearly deserving of the list, so let’s cheat and include the two as a pair.

The first featured two missed Cavalier attempts at the win in regulation before the Warriors small ball lineup blitzed to a big overtime lead.

The second had LeBron post 40 points, 12 rebounds, 8 assists…and need a late miss and an even later turnover by Steph Curry to escape Oracle with a win.

Duke led for most of the game, but were outscored by the Irish 19-8 in the final 10 minutes of the game. Jerian Grant simply refused to lose. He scored 23 points and added 12 assists before taking it upon himself to forbid the Irish students from rushing the court after the win. 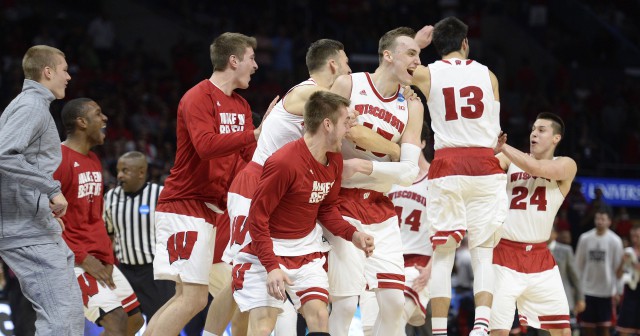 The best team in college basketball lost to the best player in college basketball, in what will be remembered as a legendary coach’s swan song from the game. Kentucky held a four point lead with 5 minutes to play. Every single second of this game was exciting. It probably even had good commercials.

I could write thousands of words about the importance of upsets and Cinderella stories, but wouldn’t we all just rather watch Ron Hunter fall out of his chair?

There has never, in the history of the wonderful NCAA Tournament, been a moment more suited for the “One Shining Moment” montage. Ron Hunter, coaching from a stool due to an injury suffered celebrating their tourney birth with his son, watches said son drill a 30-something footer to beat a 3-seed and proceeds to tumble from the stool. It will never be beaten.

This will come off crazy, but I firmly believe that the 2015 versions of Wisconsin, Duke, and Kentucky were among the best college teams of the last 25 years. All three of them, if they were to escape one another and time travel to almost any other year, would be more than capable of winning the championship, if not be expected to do so.

The three chances we had to see these three teams play each other (the early season Duke-Wisconsin game and now numbers 6 and 8 on this list) gave us stellar play and perfect competition. If scientists need a reason to look into time travel, setting up a 2015 Kentucky-Wisconsin game is good enough for me.

One of my favorite things about basketball is that certain highlights leave me in disbelief, even in the months and years to follow.

The Pelicans needed this game to keep the series within reach. After hitting a three with his team down 15 with under 15 seconds to go, Steph Curry gave himself a chance to extend the game.

You can count the more amazing shots in basketball history on one hand.

You can call me biased for ranking this so high. That’s OK.

The game took place in the iconic building which serves as this blog’s namesake. I sat at center court on press row, directly between equally raucous fanbases. It was the loudest arena I’ve ever heard in my life, for both teams. The dispatch I wrote here on the blog afterward reads more like a kid in a candy store than a professional writer, though it’s still one of my favorite PB pieces ever.

You can scoff at me ranking this higher than the NBA Finals or the NCAA title game. This was two very good teams, who hate one another, in the perfect setting, battling for a championship. It ended in a two point win for Harvard after Yale missed their last shot. It was perfect.

How high does a game deserve to be ranked, simply for having the best ending? The RJ Hunter shot was great and the Curry shot unbelievable, but this regular season game had without question, the best final nine seconds of any contest in 2015. Here are all nine of those seconds, in one GIF.

Keep in mind, that Perry Ellis layup at the end is not to extend the game. Neither was the Juwan Staten made layup before that. In nine seconds of game play, and only a smidge more of real time, one player made a shot to take the lead and another missed one to win the game.

While most sports fans itched to find a way or a place to watch the Pacquiao-Mayweather fight, basketball fans were treated to the best NBA game of the calendar year. The only first round series to feature two legitimate title contenders went to seven games and was decided by this:

Those parentheticals may diminish the importance of this game now, but that night, this game was EVERYTHING.

The stakes of this game were unmatchable.

Kentucky looked to keep their perfect season alive. Notre Dame was led by two seniors (Jerian Grant and Pat Connaughton) eager to reach the Final Four and extend their careers.

For 39 minutes and 15 seconds, the two teams played to a grinding standstill. Karl-Anthony Towns announced himself as the premier NBA prospect in America, finishing with 25 points.

And in then end, as with every great basketball game, it would come down to one shot. Everything we remember about this game, these teams, and this year changes if Grant’s shot falls at the buzzer.

But he missed, Kentucky survived, and the rest is history.