Given the current state of the NBA and basketball internationally, the United States will, again, be heavy favorites to win the Gold Medal at the Olympics in Rio this year.

Perhaps more interesting then, is the players who will be selected to represent the red, white, and blue. The NBA’s elite are a mish-mash of the old faithfuls and new young guns. 2016 will mark a changing of the guard in many ways. A new generation will play for the USA.

Look at the recently released 30 finalists for the Olympic team and you’ll quickly notice some familiar names missing. No Kobe. No Wade or Bosh. No Garnett.

And of the names listed, for many, this will surely be their last Olympics. Carmelo Anthony, LaMarcus Aldridge, Chris Paul, and Andre Iguodala will likely not be considered for the 2020 Games. Even LeBron has hinted that this will be his last go-around.

All of these factors have led to what may be the most competitive Olympic tryouts in decades. Who deserves the 12 spots? Here are my picks: 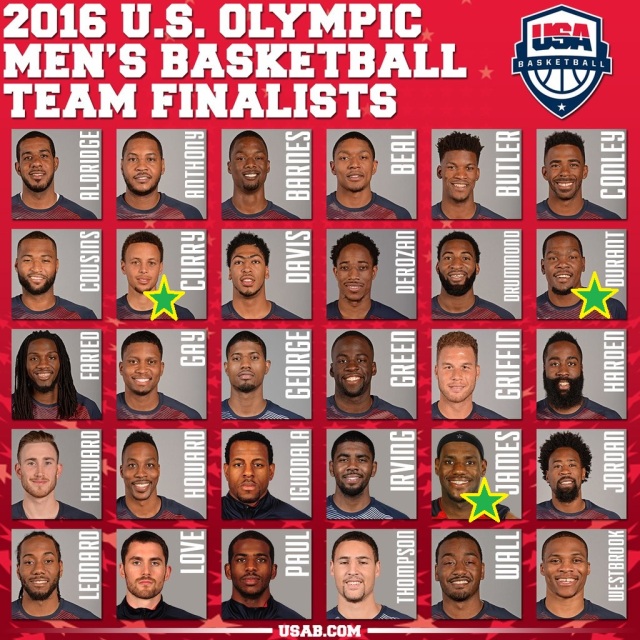 Steph Curry: If you’ve watched a basketball game in the last year, not even one Curry even played in, like it could be a 5th grade girls game, you’d still know he’s on this team.

LeBron James: Sure, we’ll take him.

Kevin Durant: Not only among the three best players in the world, but also has a game that fits in a variety of roles. Need him to stand in the corner and create space? Yeah, I think his defender will respect his ability to make a shot.

Rounding Out The Starting Five 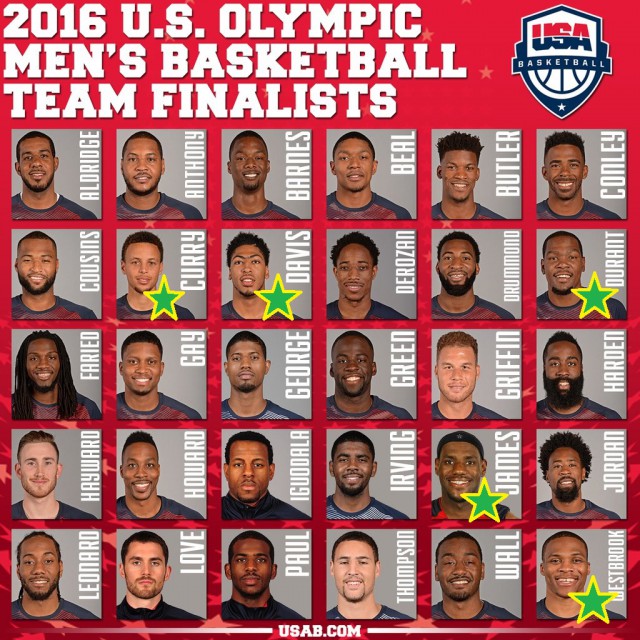 Anthony Davis: The Brow is the most physically impressive big in the world. He’s tall, long, quick, long, strong, and also long. He can play the 5 or the 4 depending on the lineup around him and is the defensive anchor of the team. So we’re starting a “little small” with Durant at the 3, LeBron at the 4, and Davis at the 5. Might I remind you that frontcourt would be 6’10, 6’9, 6’11? We’ll survive.

Russell Westbrook: Because Steph Curry is an entirely different sort of point guard, I have no worries playing another combo guard here. In today’s world, both Steph and Russ play the point, but in a lineup together they make up for one another’s weaknesses. Steph shoots, Russ slashes. Russ guards twos, Steph shoots some more. 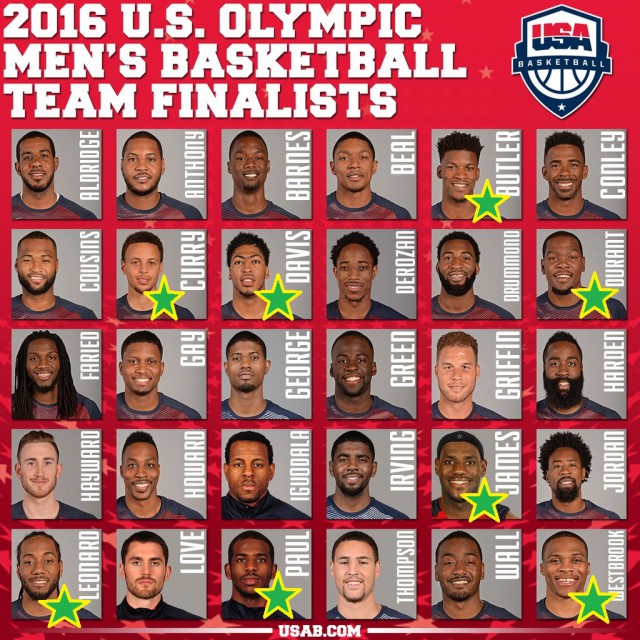 Chris Paul: Neither of our starting guards are truly truthful true point guards, so we’ll take the world’s best traditional point guard and have him run the second unit off the bench. There will be at least one or two games in which he has that unit cooking so well that taking any of them out, let alone Paul, would be dumb.

Jimmy Butler: Is Jimmy Butler the best two guard in the NBA? Or in the world? Let’s find out. He gives us scoring and lockdown defense off of the bench.

Kawhi Leonard: SPEAKING OF DEFENSE, I really wanted to start Kawhi but just couldn’t justify him over Durant or LeBron. When the opponent has an elite swingman, Kawhi comes in to give that swingman 25 minutes of hell. Oh and Leonard is casually 2nd in the NBA in 3-point percentage.

The Rest of the Bench 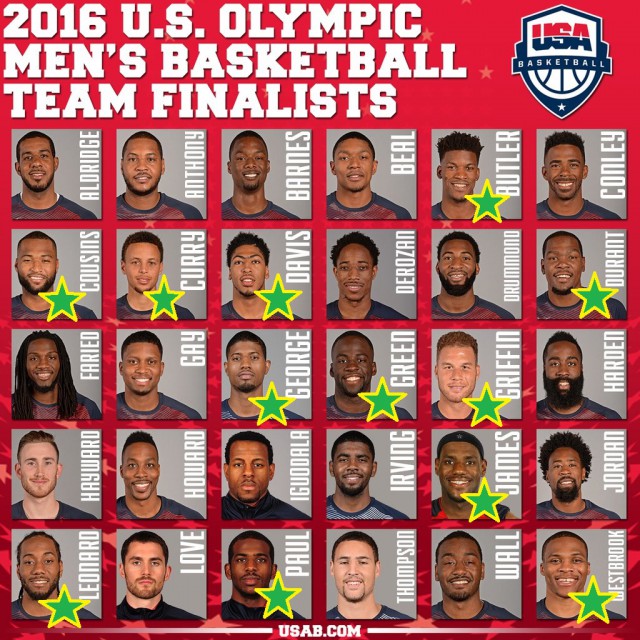 Paul George: Maybe he’s redundant after LeBron, Durant, Butler, and Leonard, but I couldn’t justify leaving him off the team. He can guard at least three different positions on the defensive end and will make big shots for you. How do you leave that at home?

Blake Griffin: At a certain point, Anthony Davis is looking around wondering where the other big men are. LeBron, Durant, or George at the 4 makes for fun lineups, but Spain, the US’s biggest competitor, has both Gasols and Serge Ibaka. We need size. Blake, playing excellently this season, is happy to provide.

DeMarcus Cousins: How about some more size? Our first, and only true center, and our bruiser off the bench. Not known for his defense, but Cousins can provide a physical presence and buckets when needed.

Draymond Green: Our 12th spot was tough. Maybe we needed another true two guard. Or another center. Or more shooting. Or another rebounder. Or lockdown defender. Draymond comes as close to filling all of those roles as anyone possibly could. At the end of the day, if I’m playing in the Gold Medal game and I want energy or just someone to rely on, Green is our man.

So that’s the team. Why did the other 18 guys get cut? Let’s run down the list.

Klay Thompson: If you wanted another guard or more shooting, Klay is your man. But look at that roster, almost everyone can shoot. It’s tough to imagine Curry, Durant, Butler, Leonard, and George not being enough shooting.

Andre Drummond: Just got nipped by DeMarcus and Draymond. Love his rebounding and his size. Don’t know that I want to tempt opponents into intentionally fouling him.

Beat Out At Their Position 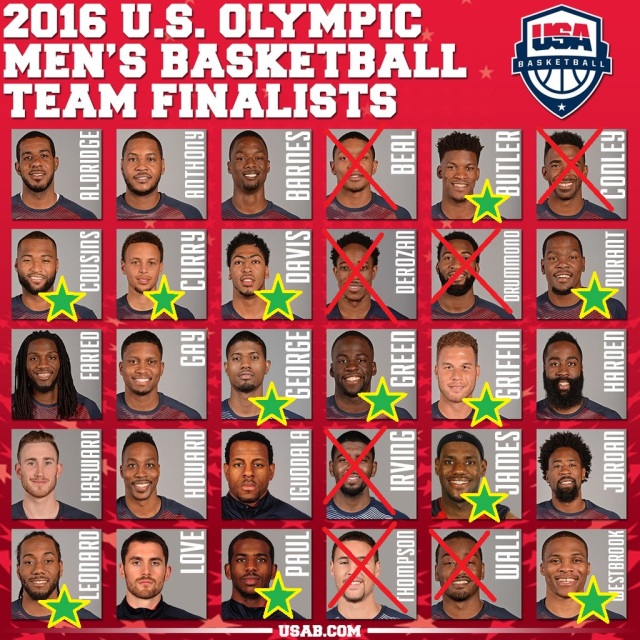 John Wall, Mike Conley, and Kyrie Irving: Each brings something to the table, just not as much as Curry, Westbrook, or Paul and I can’t see a need for four point guards.

Bradley Beal and Demar Derozan: Same issue, but at the shooting guard spot. Jimmy Butler is the best there is, Curry, Westbrook, George, and Leonard can play there as well, and even Klay would sneak in ahead of these two.

The Elephants in the Room 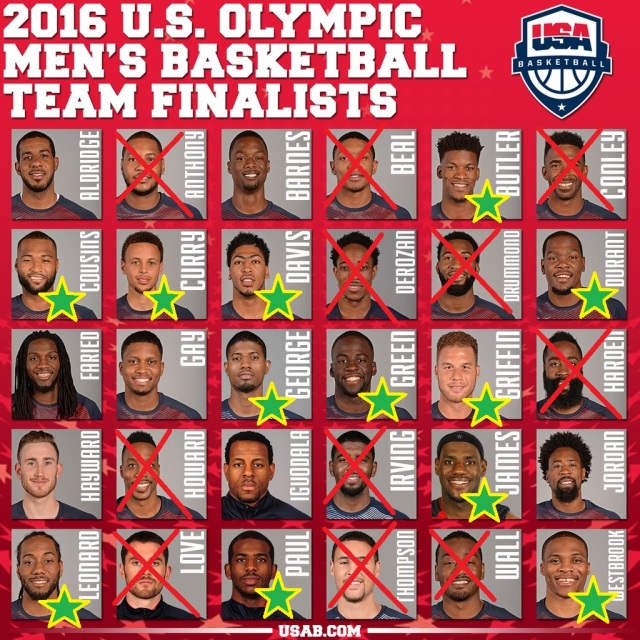 James Harden: Is this crazy? He can’t defend, nor does he even try to defend. On the other end, he’s a ball stopping, hero baller. With the amount of talent on this  team, it would be crazy to let Harden play his game. Unless he shows in camp the ability to play nicely with others, I leave him here in the States.

Carmelo Anthony: I’m fully aware that Olympics Melo is very different from Knicks Melo. My issue is that 2016 Olympics Melo will not be 2012 Olympics Melo. Maybe he hasn’t quite lost a step, but the Butlers and Leonards of the world have made Carmelo a redundancy we can cut from the Rio squad.

Dwight Howard: I did not, for even a second, consider keeping Howard on this team. Even in 2016, that feels odd and he fits more into this this category than any other.

Kevin Love: Not really sure I see what role he plays for this team. Shooting and some rebounding? We have that already.

Not The Right Fit 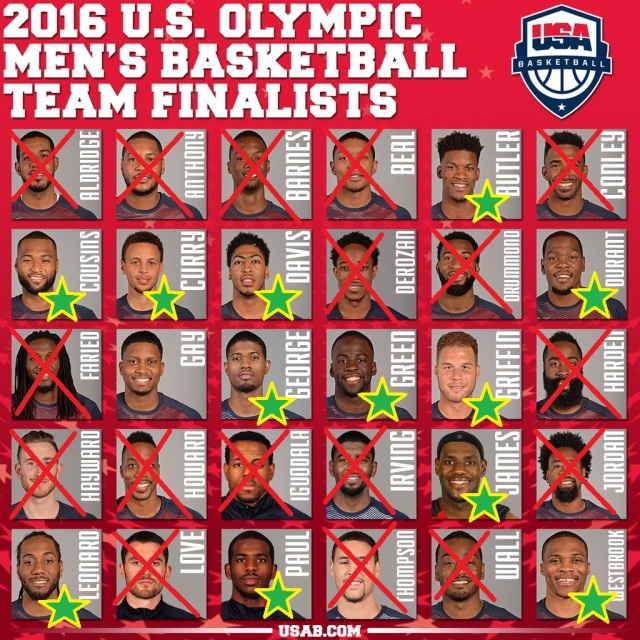 LaMarcus Aldrige: On the Blazers he saw too many isos to be effective in this kind of situation and now with the Spurs, he’s a part of that magic offensive machine. This team will operate somewhere in the middle, and I don’t see LMA shoehorning into it.

Andre Iguodala: I understand why his defense and unselfishness put him into the conversation, but there are too many guys on this list who give you that and more.

Harrison Barnes: Similar story here. He’s versatile and can help in a lot of ways, though not as much as Leonard, George, or Butler. Or LeBron, obviously.

Kenneth Farried: An excellent energy guy if Draymond Green didn’t exist. He does, so no Manimal for us.

DeAndre Jordan: If Drummond is out, Jordan is definitely out. Not sure how anyone would chose DAJ over AD. 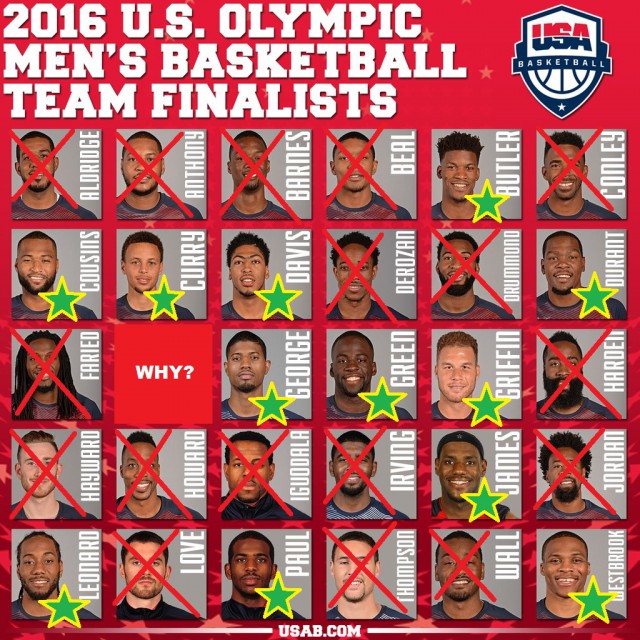 Rudy Gay: And now, a list of players I’d consider over Rudy Gay:

Damian Lillard, Kyle Lowry, Chris Bosh, Ryan Anderson, Kyle Korver, Paul Millsap, and you could even talk me into letting Brandon Ingram, Buddy Hield, or Kris Dunn attend (aka “pulling a Laettner”) and learn something before sending Gay an invite.

Players That I Forgot, Even If For A Second, Are Not American and Almost Listed Here