Johnson will soak up the BPOTBT (Best Player On The Best Team) votes as long as his Tar Heels stay atop the standings. Unlike others of that ilk, he would in no way be undeserving of the honor. His 39 point, 23 rebound performance at Florida State was good enough to vault him into the lead for this award and he hasn’t done anything to jeopardize that status, save for an ugly, foul-infested game against NC State.

On His Heels: Anthony “Cat” Barber

The NC State point guard leads the conference in scoring and is 4th in assists per game. He’s averaging 5.4 more points per game in Wolfpack wins than losses. There’s cause and effect there.

After Louisville topped UNC, there’s a chance the Heels won’t be the best team in the ACC and Johnson will lose the BPOTBT advantage. In the meantime, let’s have some more fun with Win-Loss splits:

That’s not even a sample size error. In four Louisville losses, Lee is 4 for 26 from beyond the arc. Yikes.

Brogdon’s chances hinge on his team no longer losing games to below average teams on the road. If Virginia can be the team that roasted Louisville on the road, Brogdon is back in the picture.

Has a Chance: Josh Hart

Time for a mini rant!

Last year, Dunn shared this award with Villanova’s Ryan Arcidiacono and that was absurd. I ranted about it in one of my tourney previews!

Neither was the best player in the conference. Darrun Hilliard was unanimous first team All-Big East, yet was not the Wildcat to share the award with Dunn. It was silly then and it’s still silly that this happened. Having to hear announcers talk about it during Villanova and Providence games all season upsets me.

Here’s our chance to fix it. Give the award to Dunn this year.

Providence already won at Nova and if the Friars beat the Wildcats again Saturday, Dunn might as well start dusting off a spot in his trophy case. Until then, all I can do is remind you that Dunn leads the league in assists and steals and is second in scoring (we’ll cover that in a second). He’s second in the nation in assist rate and fifth in steal rate. No one gives the ball to teammates and takes it away from opponents as well as Kris Dunn.

Finally, a quick round of my favorite game: “How Big Is Kris Dunn’s Lead For Best Steal Rate In The Big East??” Brought to you by the fine folk at KenPom.com. 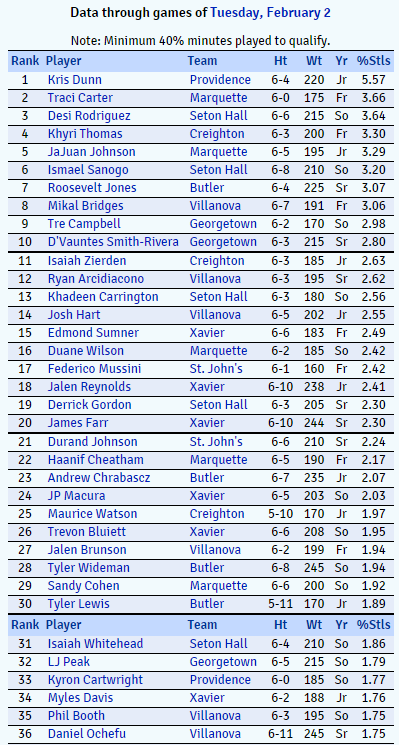 But Wait, What About…(sigh): Ben Bentil

Remember when I said Dunn was second in the conference in scoring? Bentil, Dunn’s teammate, is first. He’s scoring more than 20 points per and having a great year. Some people, especially if Providence wins Saturday, will be sucked in to voting for the team’s high scorer.

Trouble for me is, college basketball stats aren’t at the level of the NBA advanced analytics yet. I can’t tell you what percentage of Bentil’s buckets have been assisted like I can for Kristaps Porzingis (hint: a lot). I can tell you that Dunn assists on 45.9 percent of his teammate’s baskets (as I mentioned, that’s a Big East best). I’m willing to bet a significant chunk of that 45.9 percent are Bentil’s scores. And how many more of Bentil’s points came after a Dunn penetration?

Please, Big East. Do not give your Player of the Year award to the best player’s teammate two years in a row. You don’t want an all-caps post here at Palestra Back. No one wants that. But it will have to happen.

He leads the league in scoring and blocks and has led Iowa to the top of the standings after some huge wins. He’s also very charismatic.

Jarrod Uthoff became the 44th Hawkeye to reach 1,000 points. His comments on the milestone. https://t.co/tzRz2zykek pic.twitter.com/EtvyRVO17q

This one would be an easy one, except..

Right Behind Him: Denzel Valentine

Valentine has been excellent. He threatens a triple-double every time on the court. Michigan State really struggled in the time he missed and clearly needs him to be their absolute focal point.

Uthoff holds a major leg up, as Iowa and Sparty have already squared off twice, the Hawkeyes sweeping the series. If Valentine is going to catch-up, he’ll need some help from others.

Will Be Considered: Someone from Maryland?, Yogi Ferrell

Maryland is tough because I think Melo Trimble would recieve any Terp votes, but Diamond Stone and Jake Layman could steal a few.

Ferrell has been excellent but right now I’d say he’s solidly behind Uthoff and Valentine, only because they’ve been other-worldly.

How much do we need to say? 46 points at Kansas? Making more than half of this three balls? Top five nationally in scoring?

Yeah, it’s done. It’s National Player of the Year or bust for Buddy.

First off, what a great nickname. If we aren’t going to call The Glove’s son “The Mitten”, what are we even doing here?

Brooks gets the BPOTBT nod for now, Anderson should overtake that title, and Poeltl is actually the most talented player.

One thought on “The Kings of the Hills: Running Down Every Conference Player of the Year Race”