Skip to content
Posted on December 30, 2016 by Shane McNichol

This past March marked the 40th anniversary of the last team to complete a college basketball season without a loss. The 1976 Indiana Hoosiers were the last team to cut down the nets undefeated. There have been eight U.S. presidents elected since that season. In that time, only four teams have even reached the NCAA Tournament without a loss (2015 Kentucky, 2014 Wichita State, 1991 UNLV, and 1979 Indiana State).

This season finds five teams yet to lose as we reach the end of the calendar year. The five remaining unbeatens have played differing schedule difficulties thus far and have very different slates ahead of them. Despite the high volume of team still unbeaten this late in the season, this particularly crop of teams appear unlikely to reach the promised land without a loss. Blame the parity of college basketball, the slog and toll of a long season, or simply the wild nature of basketball. If I had to bet on whether or not a team would enter the NCAA Tournament undefeated, I’d place my money against it, but all five will be exciting to keep an eye on. Let’s run through the remaining unbeatens and rank them in terms of how soon they’ll find that first loss.

Andy Enfield has done some lovely work in his fourth year at Southern California, leading the Trojans to a 14-0 record. Without question, they will be an intriguing team in the Pac-12 this year and in March, but the undefeated tag won’t be around for long. To date the Trojans have played two to 50 KenPom teams and the 253rd ranked schedule in the nation. About six hours after this post goes live, USC will face its toughest game to date, a meeting with the Ducks at Oregon. If they can win tonight and extend the winning streak into January, it will be because they started defended and getting rebounds on that end of the floor. The Trojans currently sit outside the top 200 in defensive rebounding rate, which is a little nutty given the easy schedule they’ve played. The Pac-12 could be a rude awakening on the glass, starting with Jordan Bell and Oregon.

The defending champs and #1 team in the nation is the second team on the list??!?!

Blasphemous, I know. But hear me out!

Like USC, Villanova is about to undertake their toughest task yet. The Wildcats next game comes tomorrow afternoon at unbeaten Creighton. A few weeks ago, you’d still favor Nova on the road against the upstart Bluejays, but that’s not the case anymore. Villanova is still without the services of injured combo guard Phil Booth, who brings an energetic element that the Wildcats have missed. In this week’s close win over DePaul, Jay Wright’s seven man rotation struggled to close out the game against an inferior opponent. On the road, in Omaha, that could be an entirely different story.

Because Creighton is really good.

The Jays have wins against seven KenPom top 100 teams, including two on neutral courts and two in true road games. Maurice Watson has played like an All-American point guard, averaging over nine assists per game and the sixth best assist rate in the nation. Marcus Foster looks like the scorer he was in his freshman year at Kansas State. On average, the quartet of Khryi Thomas, Cole Huff, Toby Hegner, and Isaiah Zierden are attempting 11.3 threes per game and making 5.6 of them. That’s good for a red hot 49.5 percent from beyond the arc. Those four shooters are part of why the Jays have shot better from beyond the arc than any team in America. The recipe is simple: spread the floor and allow Watson and Foster to penetrate and create. If you help off of shooters, they’ll stroke it from outside. If you don’t, the guards are capable of scoring, or dumping off to Justin Patton, a man built to finish dunks and baby hooks. Patton is shooting 74% from the field this season, good for third best in the country. I’ve already spouted my love for Justin Patton here at the blog.

If you don’t think Creighton is a national title contender, you haven’t watched Creighton play yet. Tomorrow’s meeting with Villanova could be their coming out party.

On Wednesday, I posted about a thousand words explaining what to love about the Baylor Bears. Their only problem with staying undefeated will be playing the toughest schedule of any team on this list. The Big XII is solid top to bottom and plays a true double-round robin schedule. That means Baylor will have the “joy” of playing away games against Oklahoma, West Virginia, Kansas State, TCU, Kansas, Oklahoma State, Texas Tech, Iowa State, and Texas. Factor in a non-conference trip to Ole Miss and the Bears will play 10 road games against teams with a 39.5 average KenPom ranking. That’s brutal before even considering that they’ll play all of those teams at home as well. They’ll compete to win the conference, but going undefeated would be a major miracle. 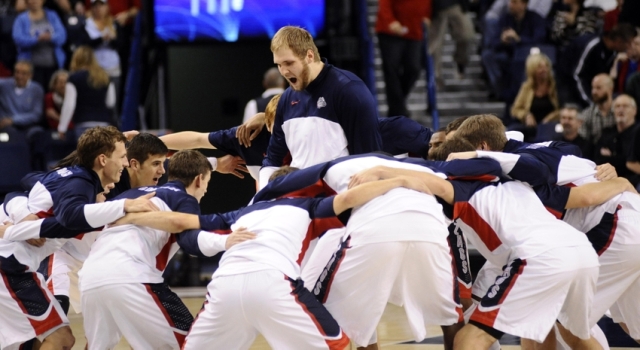 The Zags always seem to find their way into this conversation, despite always scheduling a brutal non-conference slate. The current team in Spokane, composed mainly of transfers and younger players, has started to gel and really look impressive. Wins over Iowa State, Florida, and Arizona highlight the resume and would usually be the toughest games on the Zags’ schedule. That’s not the case this season, with a home-and-home against arch-rival and ranked St. Mary’s looming. The Zags will host the Gaels on January 14 and travel to Moraga, CA for the rematch on February 11. It’s certainly possible the Zags drop one of their other conference games; the WCC is improved, ranking 11th of 34 conferences in Division I. But as the Bulldogs continue to mesh and learn Mark Few’s system, the chances of dropping any game except the road match-up with St. Mary’s falls with each passing day.