Skip to content
Posted on November 14, 2017 by Shane McNichol

Welcome to Palestra Back’s Season Preview! As this season tips off, we’ll be highlighting some of the most fascinating teams in college basketball. These aren’t the best teams or the highest ranked teams, just the handful that we think you’ll want to have an extra eye on over the next few months.

Why Do We Care?

Quietly while you weren’t looking, the Irish went to back-to-back Elite Eights and then finished in the AP top 15 last season. Mike Brey, who as recently as three years ago, looked like his bark was bigger than his bite, is secretly one of the hottest coaches in the nation. Notre Dame, even with success over the years, has never won a conference regular season championship since joining the Big East in 1994.  The ACC is as stacked as ever, but the Irish have a real shot to break that streak this year.

Two big names depart after successful careers: wing players Steve Vasturia and VJ Beachem. Both were adept at shooting and slashing, making Mike Brey’s offensive system hum like a recently serviced sports car. Replacing them on both ends on the floor is a tall task for this program. 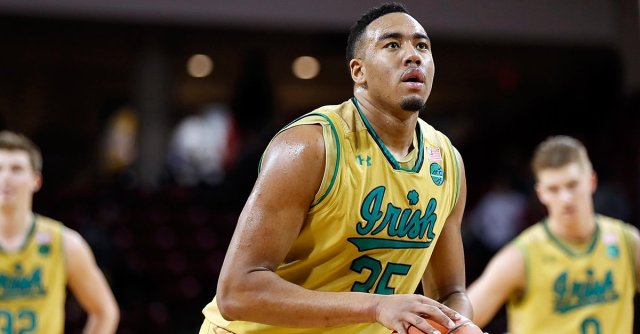 You could argue that no team in America brings back two more important players than Notre Dame. Two players doesn’t make a whole team, but hell, it’s a start.

Inexplicably, Matt Farrell is back to run the point for the Irish. I was taken aback when I saw his name popping up preseason, certain that he was off to play in Europe after what felt like nine years in South Bend. Not the case, and he’ll bring a serious veteran presence to this club. Farrell shot better than 45 percent from outside the arc in conference play and averaged more than five assists for the season. Without Beachem and Vasturia on the wings, Farrell’s role in the offense will only increase. The ball will be in his hands nearly non-stop, and he has the vision and ball-handling ability to control the game.

Joining Farrell is Bonzie Colson, who may just have the most interesting game in college hoops. He’s a 6’5, 225 pound rectangle of a man who uses his low center of gravity to control the paint. He led the ACC in defensive rebounding rate, often warding off opponents half a foot taller. Not since at least Sean May, if not Charles Barkley, has the basketball world witnessed someone use their width to this great of an advantage. On top of that, he made 43 percent of his long range attempts and averaged more than one steal and one block on the season. Who is this monster and what planet did he come from?

Not a ton of truly new blood will contribute for the Irish this season, but many previous bench players will assume larger roles. Martinas Geben scored just 3 points on 12 minutes per night last season, though now steps into the starting lineup as a senior. This summer he played for his home country of Lithuania in the World University Games. In the gold medal game, Geben and the Lithuania squad topped Team USA to win the tournament (Team USA was entirely made up of Purdue’s players and coaches, somehow). After a productive summer abroad, Geben will battle some really effective ACC big men in the paint and could decide Notre Dame’s fate.

Those numbers put Notre Dame right in the hunt for the title of “Best ACC Team Not From Tobacco Road”. This team is talented enough to eclipse that moniker and win the conference. I haven’t even mentioned starting shooting guard and cartoon lacrosse player Rex Pflueger yet!

Big Games on the Schedule

Our first real look at Notre Dame comes after Thanksgiving when the Irish battle Michigan State on November 30. A few weeks later, Notre Dame draws Indiana at this year’s Crossroads Classic, but outside of those two big event match-ups, the Irish play a typically soft schedule. RPI be damned, Mike Brey likes to stack up easy wins early on.

In ACC play, we only get to see Duke and Notre Dame square off once, and the game is at Cameron Indoor.

Shane McNichol is the founder, editor, and senior writer at PalestraBack.com. He has also contributed to ESPN.com, Rush The Court, SALTMoney.org, Larry Brown Sports, and USA Today Sports Weekly. Follow him on Twitter @OnTheShaneTrain. If you have any suggestions, tips, ideas, or questions, email them to palestraback@gmail.com