Two weeks ago, I published a “Western Conference” version of a college basketball All-Star team. Jealous of the NBA’s debate about snubs and All-Stars, I wanted to see what college basketball’s version might look like as well. I planned on publishing the Eastern stars soon after that post, but the Eagles went ahead and won the Super Bowl, sidetracking the college basketball thoughts in my brain. Here now are my picks for twelve college hoops All-Stars from east of (my arbitrary East/West dividing line) the Mississippi River.

The freshman phenom has seen his season develop in a very unique way. He entered college basketball on the top of most recruiting rankings and NBA Draft boards. His success in college and his stock as a pro prospect would seem to be directly correlated, yet that hasn’t been the case. Bagley has been productive, impressive, and downright dominant in his time at Duke. He’s posted 20 and 10 on ten occasions and added 18 double-doubles in 24 games. Despite that, draft nerds have picked apart the problems with Bagley’s game in an NBA context. Duke fans don’t really care, as long as he keeps rolling in Durham.

Even if there are other Boilermakers worthy of recognition, Haas is the straw that stirs Purdue’s drink. He looks like he was sculpted by a God who had never seen a basketball game attempting to build a basketball player. The giant stands 7-foot-3 and 290 pounds of nimble muscle. His 15 points and 5 rebounds don’t look as dominant on paper as you’d expect. Factor in his lower level of playing time, due to conditioning, foul trouble, and match-up problems, and Haas’ stats begin to pop off the page. He posts 38.4 points and 13.4 rebounds per 100 possessions. Compare those numbers to Marvin Bagley, who averages 21 and 11 per game, but just 35.8 points and 19.3 rebounds per 100 trips down the court. Haas is a super efficient option for Purdue in the post. Efficient scoring is just the beginning. He attracts double teams with the ability to pass out of those conundrums. Haas draws the 15th most fouls in the nation, either while trying to score or as an immovable force in the hunt for rebounds. Haas changes the course of every single Purdue game, purely with his size and skill.

The junior point guard is currently taking his turn as the alternative du jour in the national media’s search for a National Player of the Year not named “Trae Young.” He’s not Young (no one is), but his 20 points and 5 assists per game in a conference as tough as the Big East earns him a spot here. Brunson is one of America’s most reliable playmakers with the ball in his hands, and adds in 44 percent outside shooting. He’s a big reason Villanova sits near the top of the polls, though he’s not the only reason…

Before the season began, people expected big things from an athletic swingman named Bridges. For most observers, Michigan State’s Miles Bridges was on top of the Player of the Year race in early Autumn. Mikal Bridges wasn’t content being America’s second best Bridges, coming out firing as soon as the Cats took the court.

Bridges scores, rebounds, and creates offensively for Jay Wright. Defensively, he’s even more valuable. Bridges can guard every position in college basketball in man-to-man and he’s dangerous at the point person in Villanova’s press, zones, and traps. His wiry frame and long arms torture any opponent looking for an opening to score. 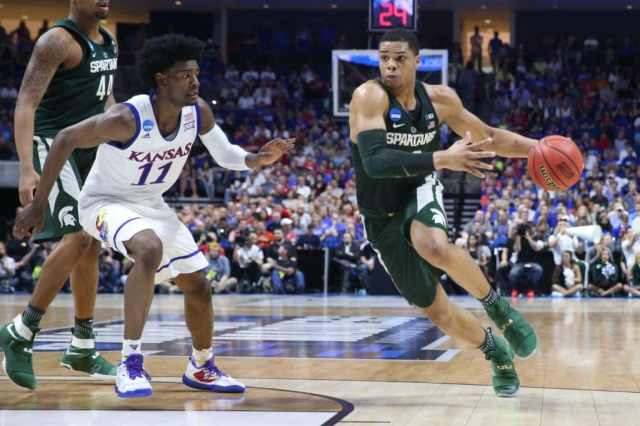 Bridges was a surprising return to college basketball, with a spot in the NBA Draft lottery likely locked up if he had left East Lansing. He came back, with expectations sky high. So far this season, he hasn’t played like the surefire First Team All-American everyone thought he’d be. Questions about his fit on this year’s Michigan State team and his motivations sprung up without easy answers. ESPN’s Dan Dakich notably said Bridges has, and I quote, “no game.”

Now, all of those questions and criticisms were heavily overblown. Miles Bridges is scoring 17 points and grabbing 7 rebounds per game. He’s hitting 38 percent of his threes, tossing 2.9 assists, and playing elite defense. His game is real and spectacular. `

You don’t even need one hand to count the number of players in college basketball averaging 3 blocks per game and shooting better than 44 percent from outside. In fact, the list is only one player long, and it’s Michigan State’s super versatile freshman. He’s struggled at times, scoring five or fewer points on six occasions. In Sparty’s biggest game of the season this past Saturday versus Purdue, Jackson battled foul trouble and was scoreless until after the final TV timeout. Anyone thinking this was a trend for Jackson was immediately proven wrong, when the 7-footer dropped 27 points and 6 rebounds at Minnesota in the Spartans’ next game. He hit five of eight threes in that game, showing again why he’s one of college basketball’s toughest match-ups.

If KBD changed his diet this year, I need to know what he’s eating. In 75 career games before this season, Bates-Diop scored only 8 points per game. This season, he’s scoring 19.9 points per contest, including seven instances over 25 points. His 35 point, 13 rebound performance against Illinois was not something you’d have expected prior to this year. Ohio State looked poised for a rebuilding year, but Bates-Diop has played liked the Big Ten Player of the Year and has the Buckeyes 13-2 in conference play.

The senior guard is perhaps the best pure bucket-getter in all of college basketball. In his fourth season on campus, he’s dropping 20 points per game on 44/46/87 shooting. In his career, Bluiett is a 16 point per game scorer in 134 total games. His numbers are starting to look statistically significant, even when compared to a conference as strong as the Big East. By season’s end, he’ll easily find himself in the top ten Big East scorers in the last 30 years. He’s never even won Big East Player of the Year, yet is quietly having an all-time career at Xavier.

It’s not easy to pin-point one Wahoo to honor, but we absolutely need to pick someone from Virginia. Guy leads the team in scoring at 15.3 points per game, on a ridiculous 7.1 attempts from outside the arc every time out. Other players attempt more than that number on a per game basis, though Virginia plays the slowest tempo in the nation. Trae Young has hoisted the 2nd most threes of any player in college basketball at 10.5 attempts per contest, good for 1 every 7.2 possessions. Guy isn’t far behind at 1 three taken every 8.3 possessions. Young’s overall usage rate (40 percent) dwarfs that of Guy’s (26 percent). This is all a long winded way of saying that Kyle Guy has been firing threes at an insane rate. He’s making 39 percent of those threes, with the ability to get even hotter. He’s hit more than five triples in four games this year and has not failed to make a three in any game this season.

This team needs at least one small school player and it’s a tight race for that spot. Oakland’s Kendrick Nunn scores 26 points per game in spectacular fashion. Ultimately though, his numbers look a little less substantial and a little more flashy. Nunn averages 20 field goal attempts per game for a team that’s just 16-11 this season.

Magee, meanwhile, drops 22 points per game on 15 field goal attempts and 44 percent 3-point shooting for a competitive Wofford team. Magee’s shooting rate and percentage has been historic this season. Only one other player since 1993 has taken at least 9.5 threes per game and made more than 44 percent of those shots. Think about how many prolific shooters have passed through college basketball in that time period and failed to hit those marks. Magee’s season has been special.

Speaking of special shooting, no one has been as hot as Markus Howard. No other college basketball player has made 11 threes in one game this season. Howard has done so twice. In fact, in the entirety of the last eight seasons, only 11 other players have accomplished that feat against a Division I opponent. Only Howard has done it twice.

He is the only player in college basketball, other than Trae Young, with a legitimate chance to score 40 points any time his feet hit the floor. He shows off his elite shooting stroke at the free throw line as well, having made 143 of the 156 foul shots he’s attempted in his career. An inch of space is enough for Howard to knock down a shot.

Our last spot is between two players who play great defense for good teams, while stuffing the stat sheet. Had I published this post two or three weeks ago, West Virginia’s Jevon Carter would likely have nabbed a spot. He’s the best on-ball defender in college basketball, by a noticeable margin. He scores with volume but not efficiency. The Mountaineers lost six of nine games and Carter loses his spot in my fictional All-Star game.

Clark, meanwhile, plays for a team that didn’t lose between December 9 and last night. Cincinnati is the nation’s second best defensive team (and would be the best in the nation if Virginia wasn’t generationally successful on that end of the floor). Clark anchors that defense, while buoying the Bearcat offense. He’s posted a double-double in seven of Cincy’s last thirteen games. He’s the only player in Division I this season averaging 8.5 rebounds, 1.0 blocks, 1.0 steals, and shooting 40 percent from 3-point land. Lest you think those numbers are cherry picked, take a look at the list of players who have hit those thresholds in the past. You’ll see names like Bobby Portis, Jared Sullinger, Kenneth Farried, Danny Granger, and Kevin Durant. You’ll also notice this is Clark and Joe Smith are the only two players to accomplish those numbers in two different seasons. If you think Clark is just the token pick from a typical slugfest Cincinnati team, you haven’t watched the Bearcats.