This Final Four has been billed as something special. Four blue blood programs. Unquestionably four top tier coaches. Top draft picks. The best college players. All squaring off in Indianapolis.

BUT, and this but is big enough for Phil Jackson to draft, there is an elephant in the room. As much as we want to laud the wins of Duke, Michigan State, and Wisconsin, this tournament is still Kentucky versus the field. They have won 38 consecutive games, many in impressive fashion.  They sport at least four first round draft picks, the best defense, most depth, and a coach who knows not to get in the way of what they have going.

Duke is good. Wisconsin is good. Michigan State is on a roll. Kentucky is on another level.

That’s not to say that one of those other teams aren’t capable of reaching that level for 40 minutes. Or that Kentucky isn’t capable of playing down to their competition’s level, like they did against Notre Dame.

If Kentucky plays their best game twice, they cut down the nets. If they don’t, one of the other three remaining teams can capitalize. Here now are the blueprints for each of the other Final Four teams path to taking down Goliath.

Naturally then, I’m going to talk about what to look for when Kentucky has the ball. None of the Wildcats stand out as particularly troubling for the Badgers to guard man-to-man. Wisconsin’s guards should be able to stay in front of Tyler Ulis and the Harrison twins. Inside, it will be interesting to see how Bo Ryan matches up with the Cats. My guess is Frank Kaminsky guards the less aggressive Willie Cauley-Stein, while Nigel Hayes battles with the bigger Karl-Anthony Towns. If Towns can be as strong and sharp as he was against Notre Dame, Wisconsin has no answer for him. Even though Kaminsky’s size could give him trouble, Towns’ strength would tire out Big Frank and possibly bring foul trouble into the mix.

On the other end of the floor, Kaminsky is going to have to work to get every shot he can. I’m not positive, but I think Willie Cauley-Stein was built in a lab to cover Frank Kaminsky. He’s long, athletic, tall, and strong. Kaminsky’s ability to shoot from outside should help draw WCS away from the rim, potentially freeing the rest of the Badgers for better looks at the basket. Even with Cauley-Stein chasing Frank, Wisconsin slashers will still need to deal with Towns, Marcus Lee and Dakari Johnson at the rim.

The Badgers chances to win may fall on the back of Sam Dekker. Kentucky is long and athletic, but I don’t know if they have the right sort of player to stop Dekker. The now injured Alex Poythress filled that role early in the year, but now only Trey Lyles plays the swingman role. Calipari may not be able to go to the three guard lineups I’ve gushed about in the past if Dekker is on the floor. If Lyles can’t step up defensively and Dekker continues his hot play, Wisconsin can win.

If Michigan State can beat Georgia, Virginia, Oklahoma, Louisville, Duke, and Kentucky in a row, they deserve to not only win the title, but Tom Izzo should probably start his campaign for canonization, or at least president. Don’t get me wrong, Michigan State’s players have played excellently, but “Tournament Tom” has put them in the position to do so. Travis Trice and Branden Dawson have shaken out the inconsistencies they showed in regular season losses to teams as bad as Nebraska and Texas Southern. The role players like Bryn Forbes and Matt Costello seem to have perfectly embraced their roles. A human being whose real name is Lourawls “Tum Tum” Nairn Jr. has been so efficient next to Trice.

Michigan State has the tallest task ahead of them, but it’s not impossible. For Sparty to win twice, their three stars had better play like it, especially against Kentucky. Travis Trice would need to get hot from deep. Denzel Valentine would have to challenge Trey Lyles in the same way that Dekker will need to. Valentine is capable of being a menace by slashing and kicking. Not many guys his size pass like he can. And inside, Brandon Dawson would need to be a bull on the boards. For a Spartans win, he’s need to clean the defensive glass and snag a bunch of offensive rebounds.

Not to mention, Izzo had better outcoach Calipari for 40 solid minutes. 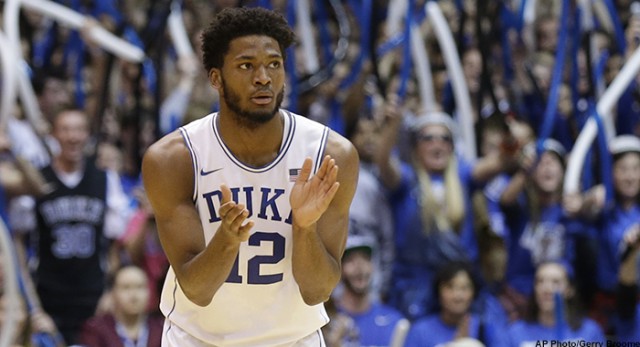 Ah, the game everyone wants. There are two Duke-Kentucky scenarios possible.

In the first, Justise Winslow and Jahlil Okafor play like the top 8 picks they are projected to be. Okafor scores no matter who tries to guard him, whether it be Towns, Cauley-Stein, or both. Winslow gets to the rim at will and causes havoc in transition. Tyus Jones and Quinn Cook hit threes at the right time. Duke leaves the final media timeout with a chance to win.

The other scenario? Kentucky throws FOUR great defensive big men at Okafor. They are fresher and faster than him, and there’s usually two of them. On the other end, Okafor gets in quick foul trouble, turning the National Championship Game into the Marshall Plumlee show. Cook and Jones can’t stop dribble penetration, meaning Kentucky’s big boys spend the entire night taking turns dunking on poor Plumlee’s noggin.