Last season, I gave into my personal bias and allowed myself to write a gushing endorsement of my favorite college team, the Gonzaga Bulldogs. From there, the Zags had a great season. They finished 35-3 with all 3 losses falling at the hands of tournament teams in Ken Pomeroy’s top 35 (#2 Arizona, #35 BYU, and #4/eventual national champions Duke). Anyone looking to apply the classic “Gonzaga choke job” to their performance last year would be sorely mistaken. Mark Few reached his first Elite Eight ever, none of the players cried on the court, and Kevin Pangos was unanimous All-Handsome Team.

This year, Few was faced with a challenge of sorts. The three best players returning to this year’s Zags (Kyle Wiltjer, Domantas Sabonis, Przemek Karnowski) all just happened to stand taller than 6’10. Finding a way to play all three or divide their minutes would be no easy task. But at the very least, he could rest easy knowing the biggest worry he had in the frontcourt was “TOO MANY GOOD PLAYERS”. Most coaches would take that.

The backcourt on the other hand, would be another animal. Few would say goodbye to Gary Bell Jr. and Pangos, who in their four years in Spokane appeared in a combined 277 games. Replacing them would be Eric McClellan (a Vandy transfer with half a season under his belt), sophomore Silas Melson, and redshirt freshman/recovering jaw fracturee (on this gruesome play) Josh Perkins. All three entered with excellent pedigrees and the chance to make the best of this opportunity.

To say it has been touch and go thus far would be putting it lightly. Despite defenses being drawn to the Gonzaga big men in the paint, this trio of guards has failed to make shots. Here’s a comparison, though it may be unfair, of their current season compared to the one Bell and Pangos recorded last year:

Clearly, the next crop of Zag guards are not capable of living up to the lofty bar set by their predecessors. The larger issue comes in how that affects the Gonzaga offense as a whole. Take a look at how Arizona defended a Sabonis post-up in the first half of their recent win over the Bulldogs:

Sabonis is a threat on the block, but far less so with Arizona’s entire team with a foot in the lane. This was not an isolated incident: 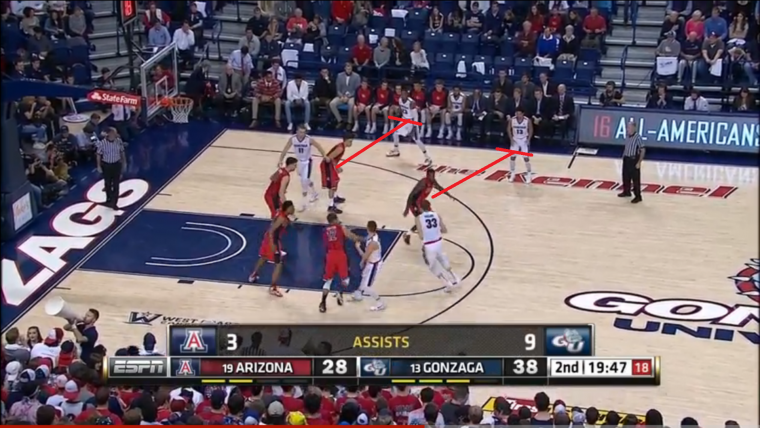 Wiltjer makes a move off a dribble handoff, but is quickly met by defenders sagging off of Perkins and McClellan. Perkins, despite being the best shooter of the three, was given an exceptional amount of space on several occasions. 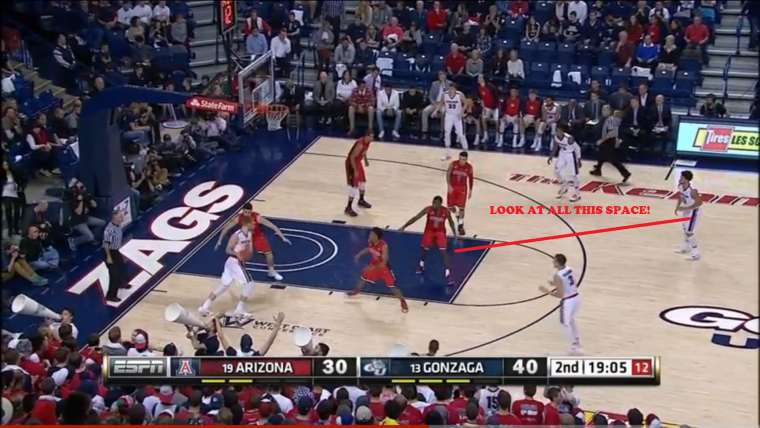 All told, the three guards got their shots up, but didn’t accomplish much. The three shot a combined 3-16 from the field.

Even worse, shooting is not their lone issue thus far this season. Handling and controlling the ball has also proved a challenge early on. Again, while it may be unfair to compare underclassmen to players as experienced as Pangos and Bell, the contrast is stark and pinpoints many of this issues the Zags have faced thus far. Take a look at their assists per game, turnovers per game, and resulting assist-to-turnover ratio.

There is, of course, good news. Today’s date is (check calendar…) December 8th. The Zags play an entirely unique schedule in college basketball. Almost no other team front loads the schedule with as many talented and competitive teams before easing into a simpler conference schedule. Usually teams are ramping up for the biggest games in January and February, while the Zags are dancing to avoid landmines in tiny gyms across the Pacific Time Zone. Their three guards will not suddenly transform into the Gonzaga legends they replaced, but over the next several months, their development will dictate how good this Bulldogs team can be.