Skip to content
Posted on March 13, 2018 by Shane McNichol

The Hoos finished the season 31-2, while playing in the ACC. They lost just twice, at West Virginia, in one of the sport’s most hostile environments, and at home versus rival Virginia Tech. The Cavaliers shot 11 for 38 from outside the arc in the game, and still were able to force overtime by only turning the ball over four times and playing their otherwordly level defense.

Virginia’s defense is not just good. The Hoos defense has been transcendent.

UVA allows 84.4 points per 100 possessions, when adjusted for opponent by Ken Pomeroy’s defensive efficiency metrics. That is not just the best in the nation this year; it is tied for the second best such number in KenPom history (which dates back to 2002). In the 17 years KenPom has been tracking those numbers, only three teams have posted an adjusted defensive efficiency under 85:

Kentucky in 2015 was one of the greatest college basketball teams to not win the title, thanks to Bo Ryan and the Wisconsin Badgers. The 2009 Memphis team couldn’t score and that caught up to them, in a 102-91 loss to Missouri in the Regional Semifinal. That Louisville team played an entirely different brand of defense from Virginia, focusing on pressure and turnovers, rather than packing the lane, yet those Cardinals might be the best parallel for Tony Bennett’s team this season. Louisville’s offense was shaky that season, with their efficiency number even lower entering the tournament. Russ Smith made every shot in the book that March and the rest is history.

If Kyle Guy, Ty Jerome, or Devon Hall catch fire this month, or even if they take turns with the hot hand, Virginia will cut down the nets in San Antonio. Losing super sixth man De’Andre Hunter to a broken wrist is a very bad break for Virginia. Even without him, the Hoos are a forced to be reckoned with.

While the Wildcats have been getting chased by federal agents, they have also been playing some fantastic basketball under the radar. You may have been fast asleep when Arizona won both the Pac-12 regular season and tournament titles, behind one of the most talented starting lineups in college basketball. Since starting the season just 3-3 following a disaster three loss performance at the Battle 4 Atlantis tournament, Arizona is 24-4. 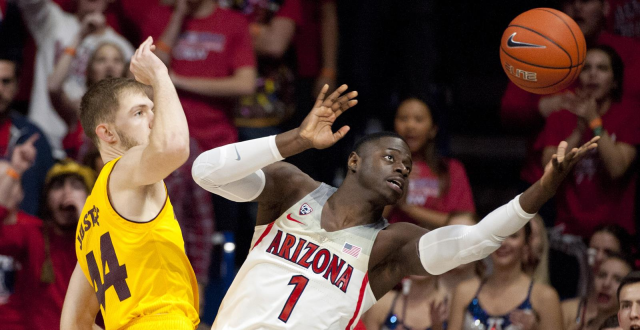 Deandre Ayton is the best big man in college basketball since Anthony Davis (more on him in a moment). Allonzo Trier is a potent scorer, capable of dropping 25 every game in the tournament. Rawle Alkins is an overqualified glue guy and Parker Jackson-Cartwright is a senior point guard.

This isn’t just your normal four seed. Arizona is a sleeping giant, with no limit to what it can accomplish.

For those of you out there who like Virginia, but can’t commit to the Hoos for some reason, may I introduce you to Diet Virginia. Cincinnati thrives on the defensive side of the ball, turning basketball games into hour long wrestling matches.

Remember that stat about Virginia’s sub-85 adjusted defensive efficiency rating I went on and on about a few paragraphs ago? Cincinnati is second in the nation in that metric, allowing 86.2 points per 100 possession (adjusted for opponent). The Bearcats and Cavaliers are basically in their own galaxy this season defensively. The difference between second place Cincinnati (86.2) and third place Texas Tech (92.1) is the same as the gap between third place Texas Tech and 49th place DePaul (98.0). If those numbers went over your head, just let me assure you, Virginia and Cincinnati are playing the best defense in college basketball by a wide, wide margin.

I apologize for turning Cincinnati’s section here into a second Virginia section, but can you blame me? 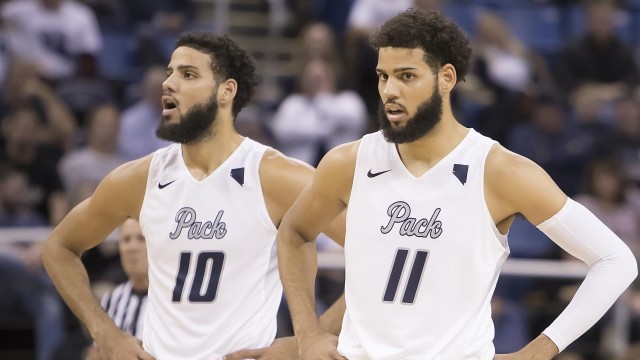 Caleb and his twin brother Cody transferred from North Carolina State to Nevada, seemingly because they only felt comfortable playing for a team named the Wolf Pack. Caleb averages 19.1 points per game and Cody pitches in 13.6 of his own.

I have a theory as to why Caleb scores more than his brother. Caleb shot 41 percent on 218 attempts from 3-point land this season. Cody tried just 47 threes this season and made under 30 percent. How many times per game do you think the defense forgot which twin is the one who can shoot? I’m willing to bet that happens at least twice a game, hence the six point difference.

I’m also willing to be the Martin twins have heard this a million times and I’ll concede that Caleb probably scores more simply because he can shoot, but Cody can’t. Even so, the Twin Theory is worth considering.

Ayton is one of the top two prospects in June’s NBA Draft, along with European do-everything-guy Luka Doncic. The Bahamas-born big man has been unstoppable for Arizona. His ceiling is absolutely sky high. Right now, the best comparison for Ayton would be “Shaq with a jump shot.” That may not even go far enough, since Ayton already has more muscle definition and a softer touch than we ever saw from a young Shaq.

That’s Ayton’s ceiling and he has a high floor too. Right now, his biggest problems are on the defensive end. Most of his lapses in that regard look to be mental, with less then perfect effort to blame more than his athletic tools or lack of instincts.

As far as this tournament is concerned, he is fully capable of dominating like Godzilla tearing through an unfortunate city. There are so few college bigs able to battle with Ayton, even fewer situated near the Wildcats in the bracket. Virginia’s 6-foot-10 center Jack Salt will be tested, if the two teams match-up in the Sweet Sixteen.

Bamba won’t need to wait long after Ayton’s name is called at the draft to hear Adam Silver call his name as well. The freshman center is built like a stretchy Marvel superhero, or better yet, a Golden Ticket winner who suffered an unfortunate accident in the licorice room of Willy Wonka’s factory. Bamba’s arms extend nearly to the rim and his vertical leap makes shooting anywhere near him a bad idea. He averaged 3.7 blocks per game (4.8 per 40 minutes!!) and posted the 7th best block rate in the nation. Bamba records a block on 13 percent of opposing players’ field goal attempts when he’s on the floor. The amount of shots he alters or scares away can barely be counted.

The Canes have been a relative disappointment this season, with hopes high in Coral Gables before the season began. Miami coasted through a bakery’s worth of cupcakes in the nonconference schedule before an uneven performance in ACC play. The Hurricanes mix of upperclassmen and freshman stars never quite clicked to the level people expected.

They meet a Loyola team that looks like it was cast by a Hollywood director for the role of a Cinderella story. Their best player is a 6-foot-1, 185 pound scrappy point guard named Clayton Custer. That’s a Friday Night Lights character name in real life, winning Missouri Valley Conference Player of the Year. Custer is Steve Nash in slow motion, leading a patient Ramblers offense that grinds out every possession until they find the shot they want. They find that shot all the time, with the 8th best effective field goal percentage in college basketball. Every Rambler who has attempted at least 50 threes this season has made at least 38 percent of his attempts. This team can beat Miami (and more…).

This game is a clash of styles in the worst way. Kentucky loves to spread the floor, isolate defenders, and attack on the dribble. Every single player who sees minutes for the Cats is a sophomore or younger.

Davidson is led by a senior who scores 21.8 points per game. The Wildcats (well, the Davidson Wildcats….both teams are Wildcats) run one of the most effective motion offenses in the nation. Bob McKillop’s players read-and-react to what the defense gives them, leading to oodles of backdoor layups and open three pointers. In fact, in the Atlantic 10 Tournament semifinals, Davidson took 14 threes in the first 13 minutes of game time before attempting a shot inside the arc.

Me (brilliant, but also screaming): 13 MINUTES IN AND DAVIDSON HASNT TAKEN A TWO YET. THREES THREES THREES! pic.twitter.com/XnV86B1uFS

Will John Calipari’s young team defend non-stop action for the entirety of the shot clock? I’m willing to bet Davidson gets enough open shots to keep this close or steal a win.

Most of these games don’t just have one thing to key on, but boy does this match-up have something special. Creighton’s leading scorer Marcus Foster burst on the scene as a freshman, averaging 15.5 points per game, at Kansas State. As a sophomore his points, minutes, and field goal percentages all dipped. He was benched, suspended, then asked to leave the Wildcats program.

Things have supposedly gone smoother at Creighton, leading to the match-up you’d have to assume Foster has been waiting for. The coach who kicked him off the team, Bruce Weber, is still at Kansas State and just as eager to win this game as Foster.

There’s a few ways to feel about this whole situation. It could be the motivation Foster needs and lead the Bluejays to a victory. It could also get in Foster’s head. He’s a volume shooter, placing in the top three of his conference in percentage of shots taken when on the floor all four years of his career. My bet is that Foster forces the issue one too many times and stalls the Creighton offense, allowing Kansas State to sneak into the next round of play.