When they play well, the Wildcats might be the best team in this tournament. You can say with some level of certainty that they are the best team in this region when things are going their way. No team in college basketball has two more developed and reliable star players as Jalen Brunson and Mikal Bridges. The role players around them pick their spots and fill in the gaps as needed.

When things go wrong for Villanova, it’s easy to see why. I broke out the Wildcats 3-point shooting numbers compared to that of their opponent in each of their four losses this season:

If you’re a Villanova fan or believer, it’s pretty easy to shake those numbers off. Sure, Villanova loses when it can’t make a shot or when the other team can’t miss. That’s true for everyone. But it specifically happened to Villanova this season on four occasions because they rely on the jump shot and they play a brand of defense that forces other teams into outside shots. Not to mention, four of Jay Wright’s last five Villanova teams failed to play in the second weekend of tournament play due to games like this. In those four games, Villanova either shot worse than 33 percent on from deep or allowed 45 percent or better on their opponents’ longballs.

Again, there’s an answer here: in 2016, Villanova won the National Championship. In that tournament, the Cats made at least 45 percent of their threes in five of their six games. In the sixth game, Villanova made just 4 of 18, while its opponent, Kansas, was equally dreadful at 6 of 22. Villanova snuck away with a five point win, but had Kansas been able to take advantage of the Wildcats’ cold shooting, that season and this program is looked at very differently.

This season, Villanova is 23-0 when it shoots at least 35 percent from outside the arc. When the Wildcats make under 35 percent, of their threes, they are just 7-4, with wins over Columbia, La Salle, Western Kentucky, and Northern Iowa.

Can they go six games without a dud? If I knew the answer to that, I’d fly to Vegas tonight to place a bet on the Wildcats. 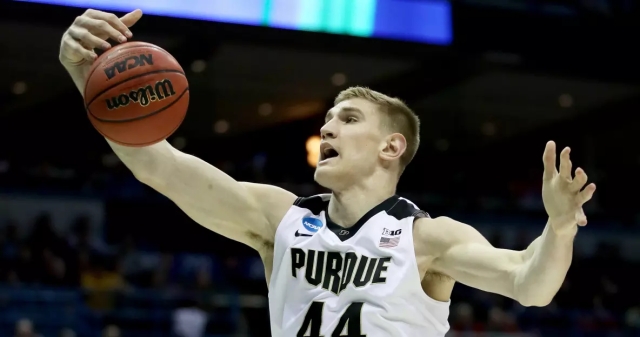 I have a special place in my heart for teams who make sense on paper. Logically, a team made of pieces that fit well together is more intriguing than a team of players who are good, but haphazardly assembled.

Purdue makes sense. The Boilermakers’ backcourt features senior point guard PJ Thompson running the show, with shoot-first sophomore Carsen Edwards prepared to take over the ball and the game if need be. Vince Edwards and Dakota Mathias are cookie-cutter examples of 3-and-D guys who battle for rebounds and find points in the flow of the offense. Isaac Haas is a massive heap of a man in the middle of the lane on both ends of the floor. Haas is a strong rebounder and has a nice back to the basket game. He doesn’t block shots well for a 7-foot-2 big man, but Purdue brings another 7-footer off the bench named Matt Haarms who is a great shot blocker. Ryan Cline spreads the floor with his lethal jump shot and Nojel Eastern does the little things for Purdue.

That is a team that makes sense. On paper.

In practice, things get sloppy sometimes. Carsen Edwards forces shots. Haas can be a black hole when they toss the ball into the post. Thompson is under 5-foot-10.

Purdue fits together like a jigsaw puzzle, but when you finish the puzzle its a blurry picture of a half eaten sandwich.

This is the kind of hard-hitting analysis you come to Palestra Back for. Who is the next best team in this region? Beats me.

If Keenan Evans’ turf toe isn’t bothering him anymore, it’s probably Texas Tech. The Raiders play elite defense and Evans gives them enough scoring punch to make a run. They are reminiscent of last year’s South Carolina team that reached the Final Four. That being said, turf toe is a nagging injury and Evans might not have the goods to carry this team.

After them? It’s a free for all. West Virginia isn’t a gimmick, but the Mountaineers rely so heavily on their press than any team who solves it can and will knock them off. Wichita State hasn’t clicked all season, mostly because they don’t defend worth a damn. Florida has no bigs to count on. Arkansas plays like the ball is on fire some times. Virginia Tech is as inconsistent as the day is long, and its post-daylight savings, so that’s pretty long.

My gut says we see Purdue and Villanova play in Boston. If either of them loses, put on a helmet because this one is going to get wild.

I understood why Mikal Bridges was considered a first-round NBA Draft pick last season. He’s long. He makes threes. He defends. He plays within himself.

That projects to a nice role player in the NBA. A Danny Green, Robert Covington, Trevor Ariza type.

Bridges came back this year and showed he’s so much more than that. He doesn’t just make open corner threes. He hits fadeaways, contested threes, and shots on the move after careening around a screener. Bridges isn’t just a good athlete. He puts his athleticism to good use, attacking the rim with reckless abandon and protecting the rim from the small forward position.

I can’t believe how good Mikal Bridges is now and I’m genuinely excited to see what he does in this tournament and in his professional career.

Speaking of professional careers, this young man certainly has one ahead of him.

De’Aaron Fox was the fifth pick in the NBA Draft last season. In his freshman year at Kentucky, he used his speed and burst to penetrate into the lane and draw fouls. No one could stay in front of him. He then played lock down defense on every possession, harassing other guards endlessly. His only flaw was the lack of a jump shot. He shot 24 percent from three.

Collin Sexton checks most of the same boxes as Fox. He’s just as quick and has equivalent court vision, making him able to get in the lane and create offense. He’s even better at drawing contact, causing 7.5 fouls per 40 minutes, to just 6.5 for Fox last season. Sexton’s jumper is far better than Fox’s, sinking 34 percent from outside. His defense, though lacking the high-level intensity we always saw from Fox, has been very good. He was determined to outplay Trae Young, and did. Young shot 6 for 17 versus Alabama with five turnovers in the game.

If Fox was the fifth pick in a good draft, how good can Sexton be? Not to get too in the NBA Draft weeds, but I’d have him as the third best prospect in the class and a good tournament could have him even higher.

As I mentioned above, the status of Evans’ nagging injury is crucial to Tech’s chances in this tournament. The Red Raiders have dropped four of their last six games and Evans failed to eclipse 13 points in any of the four losses. In the two wins however, he’s made double-digit trips to the free throw line and scored 23-plus points. Before Evans injury creeped onto the scene, Tech was 22-4 and has Final Four aspirations. If he can play the Kemba Walker role as the scoring machine on a defensive team, Texas Tech is very much a factor in this region.

No team beats West Virginia without solving their murderous press to some degree. Murray State starts two point guards who can handle the ball effectively. Johnathan Stark is a scorer first, with a killer mentality when he has the ball. Ja Morant is a freshman who chose Murray State over higher level programs and he’s immediately been a factor. He leads the Racers in assists and facilitates offense in the screen-and-roll game.

If those two guards have success not just in getting the ball across halfcourt versus the West Virginia press, but if they can set-up the Murray State offense and convert scoring opportunities into points, the Racers have a chance at the upset.

Virginia Tech has a better basketball team than Alabama does. Sometimes that doesn’t matter when there is a player as good as Collin Sexton on the other side. It’s lazy and cheap to say that Sexton will determine the outcome of this game. He’ll need to play well, but this game will be decided by the rest of Alabama’s roster. If they can pitch in effectively, rather than sidetrack Sexton’s efforts, the Tide can win.

John Petty has, at times this season, taken away from Sexton’s control of the offense. He’s a volume shooter on a team with a top five player in the country. If Petty, and the rest of the Tide, make their shots or pass them up in favor of Sexton’s scoring, Alabama is in better shape.

Butler is super high variance. The Bulldogs win over Villanova was one of the best games any team played all season. They made over 62 percent of their threes! They also lost to St. John’s and Georgetown.

Arkansas has one of the best backcourts in the country with Daryl Macon and Jaylen Barford. They are a thunder-and-lightning style attack that is determined to get into the paint and create offense. Butler will need to slow them down in order to advance.

The Bonnies looked great in their win over UCLA in the First Four. Jaylen Adams and Matt Mobley are one of the best guard duos in this entire tournament. You know what has historically performed well in the NCAA Tournament? Guard play!

Know who else has good guards? Florida. Chris Chiozza and KeVaughn Allen won’t go away easily.