What he does well:

Many prospects project to be good defenders at the next level. In this class, only Zion Williamson eclipses De’Andre Hunter’s potential on the defensive end of the floor. He could truly become a perennial contender for First Team All-Defense, growing into a Kawhi Leonard or Paul George type player defensively.

His work on close-outs and rotations in Tony Bennett’s Pack Line defense is one of the key reasons Virginia was elite on defense.

Hunter guarded every position in college and, if he continues to develop physically and continues to exhibit a high basketball IQ, should be one of the most switchable, versatile defenders in the NBA.

Hunter isn’t an elite offensive player. His game will need to grow on that end of the floor. Right now, however, he has an incredibly mature grasp on his capabilities and how to put himself in a position to succeed.

In his two years at Virginia, Hunter took 607 field goals and scored 882 points, for a ridiculous 1.453 points per shot. When sizing that number up with other prospects in this draft, Hunter’s efficiency is off the charts. 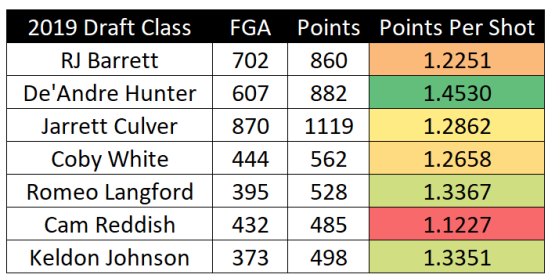 Some of this is due to Tony Bennett’s system at Virginia, which puts players in a position to succeed. A lot more of it is thanks to Hunter’s understanding of what he does well. He makes open jump shots when he finds them. He loves a one dribble move to a place where he can find a shot he likes.

When he attacks the rim, he does so with a nose for contact and the bucket.

He’s not going to score 20+ points per game on his rookie contract, but he will make the most of the shots he does take.

At times, Hunter shied away from taking center stage. In the national championship, this wasn’t the case, as he was the best player on both ends of the floor the entire night. But in earlier games this season, Hunter disappeared from games.

In one instance, I mean that quite literally. In Virginia’s miracle win over Purdue in the NCAA Tournament, Tony Bennett chose to bench Hunter late in the game. With his season on the line, one of college basketball’s best coaches felt safe without Hunter on the floor. Hunter finished that game with 10 points on 4 of 9 shooting in 36 minutes of play.

In 71 career games, Hunter scored 10 or fewer points 27 times. Only 8 of those games occurred this season, yet when comparing the sophomore’s body of work to the resumes of other players in this draft class, that lack of consistent production is notable.

De’Andre Hunter is a very capable shooter when he’s open. He has a reliable stable of moves when working in the short post or from the elbow.

Yet at this point in his career, De’Andre Hunter doesn’t have the ball-handling chops or the fluidity in his game to be the kind of player a team can rely on to score at an elite level. In the top end of the lottery, that’s cause for concern.

Kawhi Leonard, a player to whom Hunter could compare to in some ways when he was coming out of San Diego State, has severely improved in this regard. His ability to find step-backs, fadeaways, and leaning jumpers has made him one of the league’s best scorers. Hunter needs to develop in similar ways.

How his game translates to the NBA:

Hunter is a perfect fit for today’s game. He shoots the ball very well for his size, but more importantly, the team that drafts him will be pleased to slot his defensive abilities into their scheme right away. Hunter will have no trouble guarding at least three positions, with a chance to compete defensively against all five positions. His long wingspan provides him the ability to close out on shooters or jump into passing lanes.

This season, De’Andre Hunter was one of the three or four best defenders in all of college basketball. No matter where he goes on draft night, he’ll immediately contribute defensively.

Shane McNichol is the founder, editor, and senior writer at PalestraBack.com. He has also contributed to ESPN.com, Rush The Court, Larry Brown Sports, and USA Today Sports Weekly. Follow him on Twitter @OnTheShaneTrain. You can find every post from this blog on Twitter by following @PalestraBack.