Opponents of college basketball often point to the same group of issues. The 35 second shot clock and subsequent pacing issues are usually first, but more recently there’s been more of an outcry about the freedom of movement.

Last year we saw a glut of handcheck fouls called and teams have adjusted to the way things are called now. The larger issue, and one that was also affected by rule changes, is the interpretation of the block/charge call.

It had gotten to the point where anyone driving the ball to the rim looked damn near scared to do so. Officials were so quick to send the ball the other way, it just made sense for any defender to step in and try for the charge, even if they needed to flop.

The NCAA responded and changed some of the language about legal guarding position and secondary defenders. It seemed to help. And then this happened.

In the biggest game of the year (two top 5 teams at Cameron Indoor), in the final 10 seconds, in a two point game, the officials called a charge. Jim Boeheim tossed his jacket, lost his mind, and was ejected.

And he may have been totally justified in doing so[i]. Let’s look at the official NCAA rulebook, specifically Rule 4, Section 17.

Article 4 of the rule states that to establish legal guarding position, a player must:

All of which the Duke defender, Rodney Hood, has done. Here is where things get dicey:

CJ Fair was certainly airborne when contact was made, therefore Hood must have both feet on the floor, with his torso facing Fair when Fair begins any upward movement. 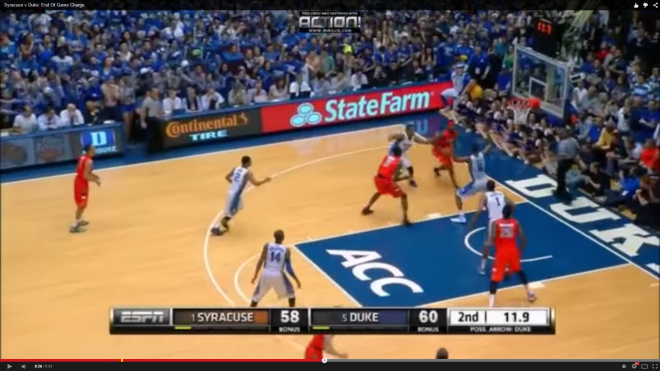 This is probably the moment where Fair starts upward motion. And Hood is facing him, with both feet on the floor, making him in “legal guarding position” according to the rules. He may still be moving laterally (watch his left foot in the GIF below), but I don’t even think this is the major issue.

Hood is a secondary defender here. He had been guarding Jerami Grant and is helping on Fair. The rule book is specific and clear about secondary defenders cannot draw a charge while standing in the restricted area. The area has helped, but it’s an arbitrary creation. In fact, if the rule were written and interpreted clearly, I think you don’t even necessarily need the area on the floor.

To me, it’s simple. If you’re a secondary defender, you’d need to be in legal guarding position, not just before the offender begins upward, but for a full two steps. This eliminates any secondary defender from turning, moving, or sliding into an offender and trying to sneak a charge call.

Why am I breaking down this play from a game last year? Because it’s still hard to watch a college game without seeing a block/charge call gone wrong.

It may be the hardest judgment call in all of sports.

Doesn’t it then make logical sense to take as much judgment out of the call as we can?

Was he still moving? Was he there in time? Was he facing the right way?

Instead of making referees run through this serious of questions in the blink of an eye, simplify the rules. Don’t make them more convoluted and complex like we saw before last season.

Just make it so I don’t cringe every time I see a ref about to call a charge.

Shane McNichol is the founder, editor, and writer at PalestraBack.com. He considers himself an expert on the charge, having drawn 17 of them in 21 games as a high school senior. He realizes this is the dumbest possible thing to humbly brag about in the author section below a blog post. Trust me, he does. Follow him on Twitter @OnTheShaneTrain.

[i] I mean that he may be right about the call. There’s a whole separate discussion to be had about whether or not Boeheim’s tirade was a good idea long term for his team. The game was not over. Down by 2 with seconds left, the game was still in grasp. However, there is something to be said for him standing up for his guys. I’m sure his message postgame was about his team playing well enough to win. I tend to believe the former, but I have about 957 less wins than Boeheim.

One thought on “We Need To Talk About Block/Charge Calls”